In the formation of both gold bumps and copper pillars it is required to contain the “plated up” structure within a “mold” of polymer material that is most effectively created using photolithographic techniques. As the bumps and pillars need to be relatively high above the surface of the chip the thickness of the Photoresist needs to be relatively thick, the same as the height of the pillar. If the pillar needs to be 50 microns high then the polymer needs to be 50 microns high or perhaps a bit higher, to ensure that the pillar or bump does not “spread” at its top.

Film thickness of 50 microns is a very thick film for spun on films, especially in one applications dry resists of 10-50 microns thick are common, however the material cost of dry film resist is substantially higher than for the simpler common Photoresist. It is desirable therefore to use such resists if the overall process costs can be made lower by their use. There are however, challenges to thick resist processing, they are: 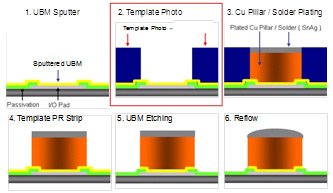