The melting and adhesion of solder balls dropped on prepared screen-printed pads of flux is a standard industrial process generally referred to as solder ball reflow.  The reflow process is typically carried out in conveyor ovens using forced convection for uniformity. The concentration of ambient oxygen during reflow should be minimized to prevent oxidation of the solder and if applicable the pad material below the ball. This is achieved by a constant flow of nitrogen gas into the tunnel called nitrogen purging. 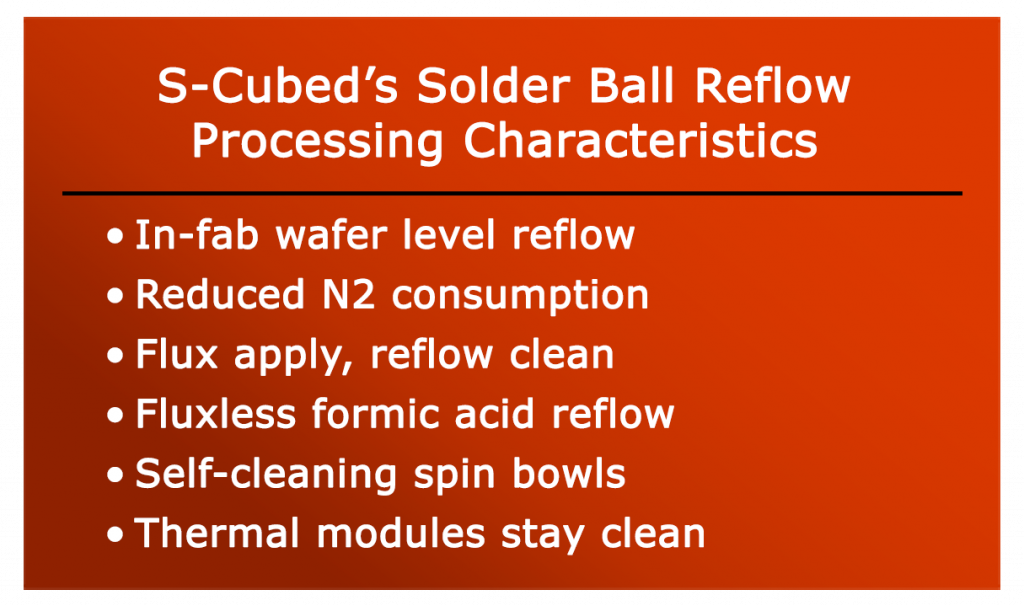 The conveyor oven tunnel is open at both ends so the required flow rate of Nitrogen is relatively high, between 1000 and 1500 SCFH.  This figure can rise during high throughput of material into the conveyor oven owing to “air drag in” as the material enters from the air ambient into the tunnel. A further concern is the generation of particulate matter as the belt of the conveyor is dragged over the fixed bottom of the tunnel. While such particle generation is not a severe problem in circuit board manufacturing, it is inappropriate in a semiconductor cleanroom. Therefore, the conveyor oven needs to be in a remote location from the wafer processing area, which requires a cleanroom. After the reflow process the, now melted, spherical balls and the substrate are cleaned by a spray/stream application of warm water followed by a spin dry, which necessitates a return to the cleanroom.

Issues with the current reflow processes utilizing a conveyor oven and/or fluxless systems: