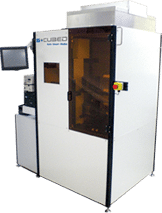 Materials used for protective films include

Some of these materials can be provided as both positive and negative tone photoactive materials as well as simply films. From a coating point of view these materials use relatively low vapor pressure solvents, NMP being a typical example. Because the solvent does not rapidly evolve during the final spin to achieve the desired thickness of material, it is often the case that final thickness is a function of acceleration, final spin speed and time at final spin speed.

The soft bake process for these thick materials tends to be longer than thinner photoresist materials, and can be as long as 3.5-4 minutes. S-Cubed has developed a soft bake thick film module that allows for these longer (PAB) posts apply bake times, and high throughput.

These materials all require a final cure at relatively high temperatures for relatively long process times. The cure step normally is done on a batch type system. Once these films are cured they are extremely difficult to remove or rework as might be expected since their purpose is to protect the active regions of a semiconductor device from ambient conditions including, moisture, oxygen, particulate contamination, etc.

For most of these films a typical process is spin coat, soft bake, cure. After the soft bake substrates may be reworked by removing the polymer film using a solvent soak at elevated temperature, followed by a single wafer high pressure solvent clean, and IPA rinse and finally a DIW rinse and spin dry. S-Cubed’s single wafer wet process clean equipment can dispense heated solvent, perform agitation movement so that the polymer film can be softened prior to high pressure last? The tool can be configured to also perform polymer coating operations such as PBO coat. BCB and/or Polyimide spin coating operations. For protective polymer films after final cure film removal can only be done if at all using oxidizing plasma.